It is often easier to see and understand the principle underlying a given issue if we invert it.  This way, we can more easily look past the specifics of how the principle is manifesting itself in a given issue and see that principle for what it is.  Here, let me use this face Book meme to explain what I mean: 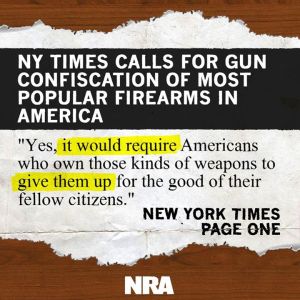 Now, let’s invert the specifics here to see if we can find the principle beneath the noise.  We’ll do that by taking the arguments and reversing them; pointing the argument and proposed solution back at the New York Times.

You see, guns are not the principle in question here.  Neither is the New York Time’s expression of their opinion.  What is at issue here is the right to self-defense and a desire by some to exploit a flaw in human nature.  These people seek to control others, and they see this flaw as an excuse to take away rights.  But that reveals an even bigger problem.

We all have individual rights, and these rights are given to us by God.  If someone denies that our rights come from God, then that person is actually denying that you have any rights at all — not even the right to your own life.  You see, if rights comes from God, then men cannot justify taking those rights away because they are not man’s to give or take.  But if rights comes from any other source, then they ultimately come from men; and if men can give them, men can take them away.  By definition, if something can be taken away, then it is not a right, but a privilege.  The logical conclusion to this line of thinking is that you only have a right to your life as long as the ruling class allows it.  In other words, without God, might makes right. So, by saying Americans should have their rights taken away,  the New York Times is actually claiming that it should be part of this ruling class.

But it is worse than just a matter of simple tyranny.  The New York Times is committing terrorism*!  By using the San Bernadino shootings as an excuse, the Times is exploiting terror for political gain..  Since terrorism is nothing more than the systematic use of terror to effect a political goal, and the disarming of America is a political goal of those who want control over America — by definition — the New York Times is actually committing terrorism by calling for gun control.  (note: when something is true by definition, it is not an opinion — it is fact).  It’s just that the Times is committing terrorism in a passive manner.  They excite and heighten the effects of the terror, seeking to make all Americans feel as though their lives are in imminent danger.  Then they push the lie that Americans have to surrender their right of self-defense to be safe.  This is a blatant manufacturer and manipulation of terror to achieve a political goal, and the dictionary calls that terrorism.

Now let’s review.  We invert the Time’s argument by applying it to the Times in a like manner.  If it seems wrong to do so, then so is the Time’s argument.  If it is wrong to take the New York Times from its owners for simply stating their opinion (i.e. exercising their right of free speech and conscience), then how can it be right to take away the right of self-defense from others?  Or, put another way, if the Times is not willing to surrender itself because of its practice of terrorism, then it has no right to demand that law-abiding citizens have their rights forcefully taken away.

However, in this case, the Times is actually committing terrorism.  By working to create terror by building on violent acts of terror to demand that rights be stripped from law-abiding Americans, the Times is committing terrorism.  So, truth be told, we could actually make a legal case to take the Times away from its owners because they are guilty of terrorism.  At the same time, we cannot make a legal or moral case for taking weapons away from law-abiding Americans because they have done nothing wrong.

Therefore, let’s confiscate the New York Times — ‘for the good of their fellow citizens.’

This entry was posted in Uncategorized. Bookmark the permalink.

6 responses to “UNDERSTANDING THROUGH INVERSION: New York Times is Waging Terrorism against America!”